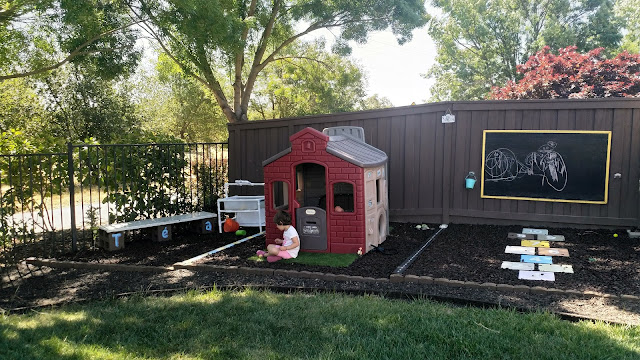 We moved to a new house and my daughter needed a new playground. Her toys were scattered in different parts of the backyard. She and I browsed Pinterest for ideas. She wanted to have a hopscotch, a car racing track, a balancing beam, her playhouse, a place to play with water and sand, and mulch (she insisted on that).

I decided to build the playground next to the shed as I already have mounted her chalk board there. The area was about 24'x9'. The ground was not even (see the top of the fence in the picture below) and that meant a lot of digging. The other problem was there were a couple of trees. I tried to design the playground around the trees, especially the little lemon tree in the center, but nothing really worked - I had to move the trees to a different location. 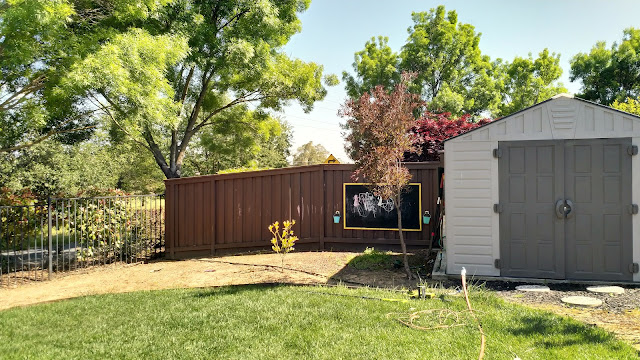 I was not sure how to level the ground so I researched different solutions online. I decided to use 4"x4" 8' beams for the grading. This decision finalized the playground design - there were going to be three sections - a section with the chalk board and the hopscotch, ending with a beam, which I would paint and turn into a car racing track, a section for her play house ending with the second 4"x4" beam, which would be the balancing beam, and a third section for the rest of her toys and games.

I started to move dirt around trying to even the ground. It was not pleasant as the ground was dry and clayey and difficult to dig. I had to start from the second section as my husband needed the little concrete patio where the play house was located for another project. I tried to even the ground as much as possible and placed on top of it landscaping fabric. I used 16 1'x1 stepping stones as a base for the playhouse, which is 4'x4' (sorry, no pictures). Since I had to finish this section very quickly, I did not put pavers base or sand under the stepping stones. They turned out to be pretty even and I got an even surface for the playhouse. I covered the rest of the section with brown rubber mulch. Even with only one section built, the area was already looking better. 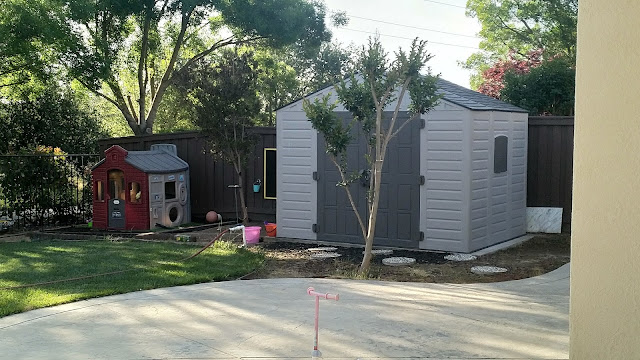 Then we moved the tree next to the shed corner to another area of the backyard. I completed the section next to the shed by evening the ground and putting landscape fabric. I placed 10 1'x1' stepping stones and my daughter helped painting them in different colors. I used printable large number templates (https://www.firstpalette.com/printable/numbers.html) to draw numbers on them. I cut corners here again and did not put sand under the stepping stones. When i tried to even them out, one of the stepping stones broke and i had to replace it. I painted the 4"x4" beam black and drew street lines to create the car racing track (see final pictures at the bottom of this article). This section took about 11 bags of brown rubber mulch. 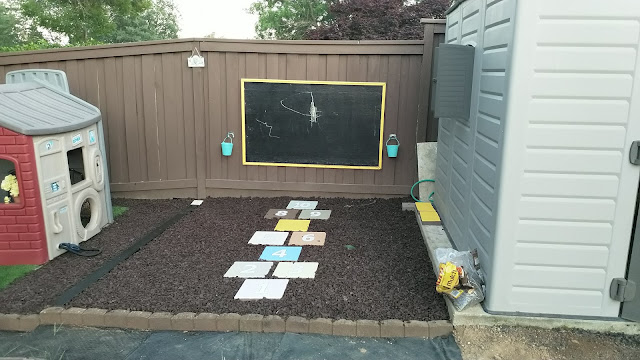 The third section was the most difficult to even out as it has the biggest slope. I had to move dirt from different areas in the backyard which was very hard and dusty. I was very tired at this point so at some point I gave up and decided to see if it will needed more leveling in the future. 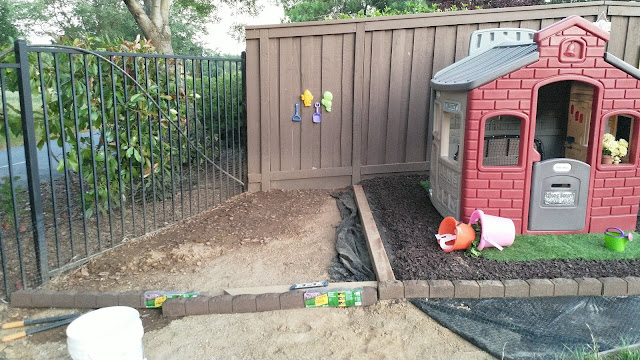 To separate the playground from the rest of the backyard, I used a rubber border, which turned out to be pretty expensive. However, due to the ground leveling, I had to use a divider that is high and thick.

I painted the 4"x4" beam between section 2 and section 3 blue and drew some foot prints turning it into a balance beam (again, see the pictures at the end of the article).

There was a piece of granite, a leftover from the previous owner's remodeling, laying around in the backyard. It was 5.5' x 16". I got a last minute idea to turn it into a bench. I bought six concrete blocks and turned them into three "legs". I leveled them and placed the granite piece on top of them. I painted the legs brown and wrote her name (see final result picture). It immediately became my daughter's favorite spot. 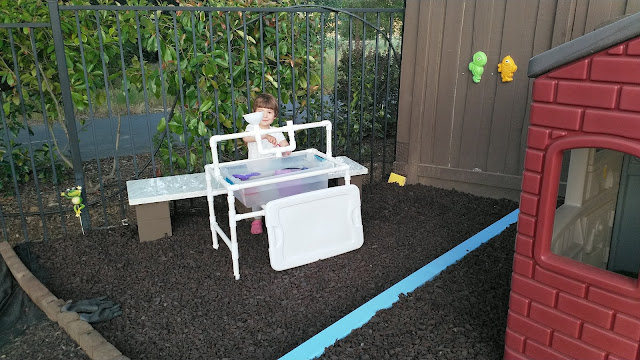 The playground was almost done, at least the dirty work.

So, the total for this project was around $500 after tax. 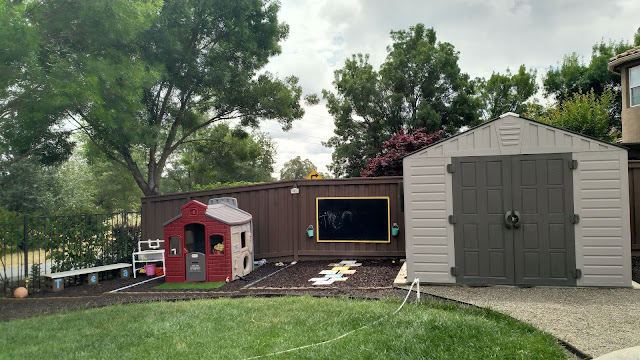 This is the car racing beam 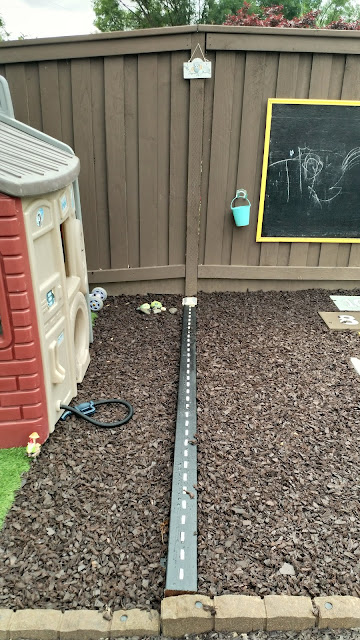 This is the balancing beam: 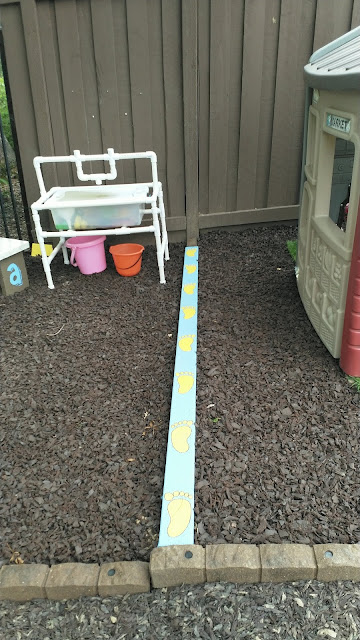 To finish the area in front of the playground, I covered the dirt with landscaping fabric and covered it with mulch that I took from another area in the backyard (preparing for my next project).

So far, my daughter really enjoys and spends a lot of time there. I hope this continues and she has a lot of fun and wonderful memories there. 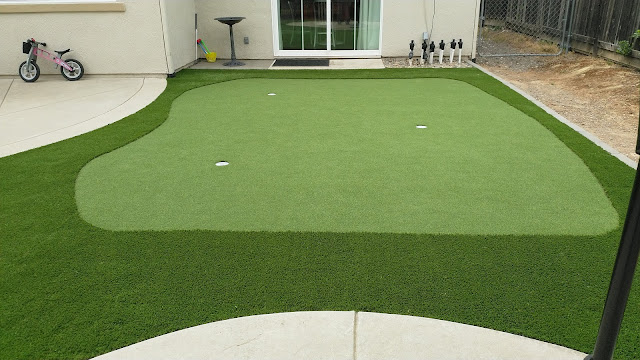 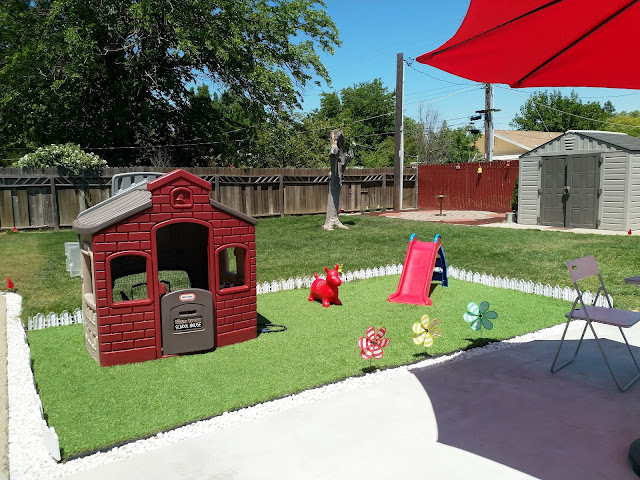 I got inspired by Pinterest a while ago to build a playground for my daughter where she could play and have fun. I decided to have the playground next to the patio, so I can be near by when she's playing and don't have to go through the mud, if it is raining. The location itself determined the size of the playground - aligned to the end of the patio and a concrete pad - 16.5' x 9'. I spent a lot of time researching and deciding on the playground surface. I was looking for a cheap and tidy solution. I really wanted to have one of those rubbery shock-absorbent surfaces used in parks but they were really expensive. Mulch was not a good idea, as well, as it tends to spread around easily. Then i thought about having a deck but I wanted the playground to be on the same level as the patio and getting the materials from the store home would have been really challenging as I have a small car. So, I settled for artificial grass. I waited for the rainy season so the ground i